I was blessed to see Mat Kearney in concert for the second time last night. The mark of any good concert is incredible music (check), feeling connected to the artist (check), and of course those who experience it with you (check). Mat Kearney’s music has been the soundtrack to some of the most important times of my life. (If you haven’t checked out his music – you need to! I’ve included links to a couple of my faves.) This week I am leaving the bleachers to experience the goodness of God and movement of the Holy Spirit in a whole new way. I’ll write about it later, but for now I simply covet your prayers. I’d love to hear your stories about “getting off the bleachers” and experiencing God moving in your life or the lives of others so feel free to leave me stories! Hope you enjoy what I learned from my first Mat Kearney concert! 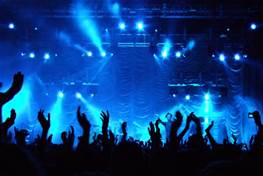 I’ve been to more concerts than I can count. I love the experience of live music and spent much of my youth chasing my favorite bands around the country. When I first started attending concerts, location was everything. I’d fight and claw and scratch my way towards the front. I’d stand my ground against the jostling and positioning of others. I’d jump and sway with abandon, not caring about what others thought. This changed as I got older. With each passing year, I slowly moved farther back and I progressively became more passive during each show.

Recently, I attended a concert of one of my favorite artists held on a college campus. As I walked into the gymnasium with the student who had graciously secured the treasured ticket, I headed towards the bleachers in the back, as I had become accustomed to doing. I heard her say, “No, Karen, this way” pointing toward the mob standing before the stage. Suddenly the changes I had made in my approach to concerts became apparent! I found myself surrounded by excited college students, and I was suddenly quite aware that I was not one! Insecurities initially overwhelmed me – I’m too old, I don’t belong. However, excitement for the experience soon took over and I found myself no longer annoyed by the student repeatedly bumping into me as he jumped, or put off by the smell of sweat salient in the air.

And then something truly special happened. The artist jumped down into the crowd, breaking the barrier between performer and audience. And I was a part of it all. He realized he’d spent too much time among his adoring fans, and looked right at me as he proclaimed “I’ve got to get back to the stage!” Then he ran past me, actually knocking into my shoulder, as he scrambled back to the stage. At that moment I realized that I would have significantly missed out had I been sitting in the bleachers. I would have observed, but I would not have experienced.

The Bible says, “Taste and see that the Lord is good.” After my concert revelation, I have to ask myself, “How often do I observe God instead of experiencing His goodness?” How often do I choose to sit on the bleachers in the back instead of standing in the crowd in front?  How often do I convince myself that sitting in the back is really no different than standing in the front when really I’ve missed out on something special and unique and maybe even life changing? The truth is that it is easier to sit in the bleachers. The bleachers are comfortable. It is work to stand in the front. It’s hot, smelly, crowded, and exhausting. But it’s in the front where the possibility of experiencing and even participating in the action takes place.

God seems to be inviting us to come to the front, to fight the crowds, to withstand the discomfort for a taste of what He has to offer. Is it possible that He is even inviting us to participate? What if He jumps into the crowd? Do you want to be in the bleachers or in the crowd with a chance of reaching out and touching Him and perhaps even receiving something from Him or being invited to join Him?

Now perhaps I’ve pushed the metaphor too far, as we are all called to join Jesus in bringing God’s kingdom to earth and because the Holy Spirit lives in the heart of every believer, we can fulfill this calling. And obviously Jesus isn’t a performer on a stage. But stay with me here, at one point He spoke to the masses – some clamored to be near him, some risked everything to touch him, some watched from a distance with skepticism, and some simply walked away. What about Zacchaeus who climbed a tree to get a glimpse of Jesus? Jesus ate at his house that day! What about the bleeding woman who dared to touch His cloak? She was healed after 12 years of suffering! What about the men whose love for their friend was so great that they destroyed a roof in order to lower him down to Jesus. Their friend was healed in more ways than one! Those who dared to get the closest to Him, experienced Him, and were never the same again. Those people ended up changing the world. Those who kept their distance have long been forgotten and are but an anonymous footnote in the annals of history.

I don’t know about you, but I’ve decided it is time that I stop sitting on the bleachers just observing. True change happens through experience. Learning about the artist and knowing the lyrics to the songs is great, but can never replace the impact and transformation potential of the experience. In order to truly believe that I am God’s beloved child and to truly comprehend His great love for me, I need to experience Him, not just learn about Him. It’s time I head to the front to fully experience His presence, and to “taste and see”. I hope you join me.

Like I said, I’d love to hear ways you are avoiding the bleachers, fighting the crowds, and experiencing Jesus from the front row. How do you see God moving in the world around you and how has he called you to join him? And finally, thanks Mat – not just for entertaining, but for offering an experience of heartfelt and meaningful music!

Dr. Karen Cleveland is the founder of MND GMZ Ministries, an organization committed to proclaiming the truth about Jesus and reclaiming the rules to finding true identity in Christ. Dr. Karen is passionate about sharing the truth that our identity as a beloved child of God is found in Christ alone and not in the things of the world. Karen earned an MA in Theology and a Ph.D. in Clinical Psychology from Fuller Theological Seminary in Pasadena, CA. She currently resides in Pella, IA. She is a lecturer at Central College, where she is also a proud alum, and maintains a small clinical practice at Pine Rest Christian Mental Health Services.